Here is the long waited for Aimpoint Micro S1 review articles that everyone has been waiting for. Let’s make this very quick and easy; the Aimpoint Micro S-1 is ONLY used for shotguns.

Some say it’s the best red dot scope for turkey shotgun, and some say it’s a waste of money.

So we borrowed it from a friend who had the setup, and we tried it out, and here are our thoughts on it.

The biggest selling point – The Aimpoint Micro S1 is made for hunting style shotguns with vent ribs.

The sight has a carbon fiber reinforced mounting system. It has the lowest optical axis on the shotgun without adding any extra weight.

The Micro S-1 is a dedicated sight for shotguns with barrel ribs. 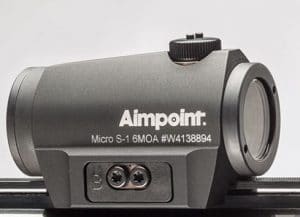 Earlier we talked about the ridiculous price tag for the Aimpoint Micro S-1. It’s pretty much the same as the Micro H1, but without the Picatinny rail. The MSRP for a brand new sight is $812.00, and the street price is around $695.

3 Main Reasons To Have Red Dot Sights For Shotguns

Having a red dot sight for a shotgun might seem like you’re trying to show off on the range. Most people believe that red dot sight is pointless on a shotgun, and some people have real practical reasons to use it.

This sight on a shotgun is perfect for sporting clays, hunting and shooting slugs.

Is the Aimpoint Micro S-1 the Best For Turkey Shotgun?

So far, most people can’t justify the cost of the Aimpoint Micro s-1 for a turkey hunting shotgun. There are many other options on the market.

For example, the Burris FastFire mini red dot sight for around $300 you can get the job done. For the price, I don’t think it’s the first option a turkey hunter should look for. 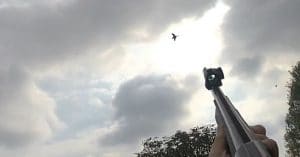 Hunting with a red dot sight on a shotgun might take some practice for some people. I would definitely recommend you to borrow this from someone and try to out before committing $700 for it.

The Micro S-1 ‘s mounting system is ONLY for shotgun vent ribs. The packaging comes with different size plate to accommodate different size rib width. It also comes with detailed instructions mounting. Then you match the best fitting piece as clamping plate.

The biggest benefit for using the Micro S-1 is to have an extremely low optical axis. It's perfect for clay shooting and hunting. It is so low that it co-witness with your front sight.

Can I Mount The Micro S-1 On AR-15 & Shotguns With Picatinny Rail?

The answer is no. The Micro S-1 mounting system is only for shotgun vent ribs. Unlike the Aimpoint Micro H1 and T1. They can accept many different aftermarket mounts for Picatinny rails.

If you plan on using the sight for other purposes, then you should buy the H1 model instead.

Is Micro S-1 Different Than The Aimpoint Micro H-1?

Besides the mounting method, the optic is overall the same as the H1 model. They are both 1X fixed sight using the 3V CR2032 battery. The objective lens is 18mm and it last 50,000 hours just like the H1.

The only difference is the S-1 model has 6 MOA dot size, and the H1 model only has 4 MOA.

Where To Mount The Sight On The Shotgun Vent Rib? 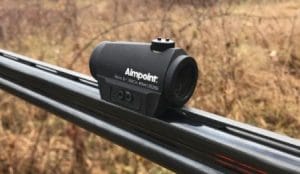 I like to mount the dot near the handguard area if you have the room. About halfway down of the vent rib is a good spot to mount it, where the red dot sits just right above the front bead. When you present the gun, that big 6 MOA dot shows up ASAP and ready to shoot.

The clamp will go into the rib section. You just have to experiment with it to find what works best for you.

The Aimpoint Micro series red dot is for the elite shooters. Keep both eyes open for maximum situational awareness is important. When we tested the sight doing some clay shooting it was very easy for me to pick up the red dot.

To learn more about shooting with the best combat red dot optics, click here for the full guide on our site.

The low mount on the shots really delivered fast sight picture acquisition speed. Shooting clays have never been so much easier with a red dot sight, and I highly recommend it.

Absolute VS 1/3 Co Witness – What Sight Height Works For You ?

How To Pick The Perfect Handgun [8 Things To Look For]