There are so much you can do with the DDM4V7, and we put together of list of the 8 Best Daniel Defense DDM4V7 accessories that will significantly improve the rifle's handling, recoil performance, and user friendly features.

This is like putting the Bushmaster ACR ambi bolt release design on an standard AR15 without spending more than $25.

It's low cost and super useful for reload and improved manual of arm. We recommend the Magpul BAD Lever

Reload when you want to, NOT when you have to! If you have to then use this to do it faster!

Send The Bolt Back Faster - Cuts down the reload speed by allowing the trigger finger to operate the bolt release from the fire control / ready position.

Improved Manual Of Arms - Use the firing finger to hold open the bolt without breaking the grip, and use the support hand to rack the charging handle to clear jams

Replace the factory Daniel Defense V7 charging handle with this one that many pros are using.

Check out other charging handles here 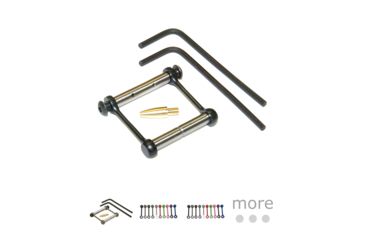 This simple kit will further fortify the lower receiver to prevent trigger pins from sliding out due to hard use?  No modification to gun required!

Quick Installation - Just install the threaded pins to replace factory pins. Just lock them in place and you're done!

Rock Solid - No worrying of pins falling out in the field.

This thing will change your shooting experience forever. You just need an AR wrench and an AR reaction rod to do this upgrade in your shop or ask a professional at your local gun shop to do it for you.

Reducing Muzzle Flip Significantly to get follow up shots on target FAST! This muzzle brake minimizes side blast and rearward concussion effects for the shooter.

Compatible With Surefire Suppressor with multiple bearing surfaces for superior suppressor can alignment.

Use the MLOK version on the Daniel Defense MFR handguard, the BCM Gunfighter grip is our favorite.

Improved Recoil Control - Stay on target during rapid fire for a tighter shot group with way less muzzle movement than the A2 flashhider. (Helps EVEN MORE when using a muzzle brake)

Quick Installation - Install two trigger pins and you are done!, no gunsmithing or re-fitting required.

Fast Trigger Reset - No pre-travel, super crisp trigger break puts the trigger back in position for the second shot immediately

We recommend the Geissele Super 42 Braided Spring with H1 or H2 buffer for 16" standard gas system V7 Pro. Try the H2 or H3 for the DDM4 V7 S short barrel.

Increased Cycle Life - Operates ONLY ~35% of its maximum stress load to increase its service life.

Fail Proof - The springs flex separately from each other like a harmonic damper to displace excess energy to prevent spring failure.

Most optics on the market today works well on the DDM4 V7, but the EOTech EXPS3 just felt right on an Daniel Defense AR loadout for CQB applications.

Support BadAssOptic.com by purchasing from our links. We get a small commission for every sale we refer at no additional cost to you!