Are you looking for your first handgun or maybe wanting something better than what you already have? This guide will go over how to pick the perfect handgun whether you're a beginner or a seasoned shooter.

We will cover the 8 important things to look for in a handgun for concealed carry, range use, and home protection.

People gravitate towards looks first, then they look at the features and the cost to feed it. Firearm aesthetics is all subjective, and it's all based on personal preference.

At the end of the day, the heart wants what it wants regardless the logics. No one wants an ugly looking gun period especially for serious gun guys.

The 3 most popular handgun calibers are:

There are plenty of debates over which caliber is better, and this article isn't about that.

Most viewers who are checking out this content are range visitors with the intent to shoot paper targets 100% of the time, and most are NOT ballistics nerds.

In that case, caliber doesn't matter unless getting involved in competition shooting where heavier bullets can knock down the steel much more effectively, and dealing with over-penetration in personal defense situations. We have a different article that you can read here.

9mm is absolutely the best for large volume training and the ammo cost is the cheapest. It's the most popular go-to caliber for concealed carry pistols, competition pistols, duty pistols, and pistol caliber carbines. That means it's easier to buy one caliber that can be used for the majority of your firearms.

40SW is a high-pressure load cartridge, and it yields higher muzzle energy, snappy recoil, and uses a 10mm bullet. While 40SW was popular for a while, however, 40SW is losing popularity due to high chamber pressures that can wear out a gun frame faster than 9mm. In recent years, 9mm technology has improved so much to the point where hotter 9mm loads can do as much as a regular 40SW, and it's less expensive, more bullets to fit in a double-stack magazine.

45 ACP features a bigger bullet with a much manageable "push recoil" sensation compared to a snappy 40SW recoil. It's much smoother with 30% more energy than a standard 9mm to knock down a heavy popper target and use it against human threat targets. It's great for full-size polymer handguns and full steel frame handguns like 1911.

Pick a gun that fits your hand is important later down the road as you train. Typically a full-size handgun is much more comfortable with all 5 fingers to grip the gun than a small subcompact gun where the shooter's pinky is dangling on the bottom.

The grip is arguably the most important part of a handgun that directly affects accuracy, malfunctions, and overall control of the firearm, and we will talk about it more in the next section.

We highly recommend checking out the guns you think you want to buy at your local gun shop or renting the gun at the range to see what you like or do not like. Also, have an experienced person behind the counter to guide you through it.

For the most part, you have to know some of the basics first, so you can appreciate the design of the gun. Otherwise, you don't know what's good and bad.

The grip angle has a direct impact on the natural point of aim angle and fast follow-up shot control. There is a low tang grip and a high tang grip.

Here is the difference:

High tang grip refers to the axis of the barrel sitting closer to the grip angle, and this provides more recoil control leverage like a revolver grip ergonomics, and the shooter can quickly get back on target. These are mostly striker fired guns and the shooter can grip the gun higher.

Low tang grip guns tend to align the sights better than high tang grips. Red dot sight users can acquire the dot much faster on a low tang grip simply due to the natural point of aim angle.

With practice, most people gravitate towards high tang grip guns.

Barrel length matters when it comes to concealed carry, accuracy, and recoil performance.

A 4.0" or 3.0" barrel is typically the choice for CCW users, which means a smaller profile to tuck under your clothing for waist carry and appendix carry.

A full-size gun features typically a 4.5" or longer barrel for duty use or competition. The benefit of a longer barrel is accuracy, reduced muzzle climb for faster follow-up shots.

As long as the shooter applies good handgun fundamentals, 9mm, 40SW, or 45 ACP performs better on a full-size gun.

The overall shooting performance difference between a long barrel vs a short barrel (Same gun, same caliber) is the slap/numb sensation due to snappy recoil.

Most pistol slides come with rear serrations to help the user grip the slide without slipping either with gloves or without.

Slides with front, sides serrations typically cost a bit more due to the extra hours spent machining the slide.

There are so many different designs out there, but most factory guns only feature "good enough" serrations until the user performs some DIY work on the grip with a soldering iron.

New handgun buyers should understand that triggers can be upgraded later, so If there is a gun you like, but the trigger isn't exactly what you want, you can change it later.

What most experienced shooters want is:

Single action is super simple, and the trigger system's main job is to release the hammer. This type of trigger lets the shooter immediately feel the trigger wall without pre-travel. When the trigger breaks are when the hammer falls.

Double action features a heavy trigger pull, and the hammer pulls back while the trigger is pulled. It basically operates both cocking and firing the gun. These are people's least favorite.

Striker action pistols don't feature hammers on the back of the slide, and it works by pulling a striker bar that directly engages the firing pin. It's kinda like pulling the firing pin back like a bow arrow and releasing (Trigger pull) it by spring tension to hit the primer. Striker action firearms are also called safe action pistols with redundant safety features to prevent accidental discharge. The only way the gun can go off is by the user deliberately pulling the trigger.

The reason is to prevent people from forgetting to turn the safety off in stressful situations. We understand new shooters want external thumb safety so they feel safe knowing they can green light or red light the gun. However, the overarching thing to know is the 4 core firearm safety rules: 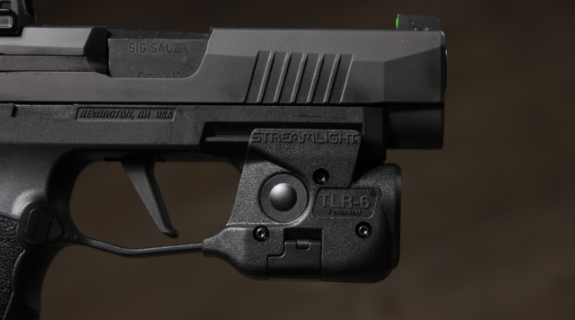 A large slide stop is great for users who may have a hard time locking the slide to the rear or have a big hand. The same goes for the magazine release button.

For new buyers who may struggle to lock the slide to the rear or release the slide, we highly recommend taking some classes so a qualified instructor can walk you through the process while teaching you the mechanics inside a pistol.

For the most part, it's about getting used to the motor skills to work the slide.

Railed frame handguns can accept most light and laser accessories on the market. We high recommend railed models over non-railed models.

How To Fix A Canted Reticle [Try These 3 Methods]