Modern AK 47 rifles will blow your mind when you see them!

The AK rifle is the most produced and iconic weapon design in history.

Its banana style magazine is recognizable by even people who don’t know anything about guns – Mostly a bad guy’s gun!

Mikhail Kalashnikov, the designer of the AK platform rifles, had passed away in 2013,

But his legacy carries on, and it has evolved into something massive.

New lines of modern AK rifles, upgrades and accessories are on the rise that most Americans don’t even know existed. 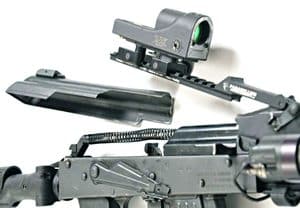 The Soviet armed forces adopted the AK47 for its automatic firing capabilities.

The rifle design was original, and it’s the most successful assault rifle in human history regarding a massive number of guns produced, in service and worldwide conflict.

The AK47 features legendary durability and low manufacturing costs, and the result was a lightweight rifle with moderate recoil that was easy to shoot, delivering tremendous firepower on the battlefield. It’s cheap and simple, and it fills the gap between a rifle and a sub-machine gun.

Some argue that if the Western society falls apart, this gun will be the weapon of choice.

The AK47 has been embraced by the shooting sports communities in the United States. Ever since then, there are growing numbers of AK fans in the US for its historical value and performance. Mikhail has passed away, but the AK culture is still alive and expanding.

The massive productivity of the AK for almost five decades that means almost over 50 armies around the world use the AK47, and the design remains the same.

Just recently with the massive growth of social media, we came across new modern AK rifles, upgrades and tactical accessories that we have never seen before. Whether its more wicked scope mounts or railed handguard, the AK is evolving into something bigger and better.

In this article lets revel some of the top modern AK rifles you might not know existed.

How Much Does A Modern AK Cost?

Generally, the more conflict, the higher the price.

As the western world begins to produce AK rifles in the United States, there is a trend of bridging the gap between AK and AR15. There are many tactical AK with AR15 style accessories to make it more effective.

Also, some of the AK are being made with CNC machined receiver than stamped receiver, which drives up the cost of the gun.

Where Is AK Rifles Made Worldwide?

When you see an AK they’re not just Russian anymore. The AK is re-branding itself with some western influence. In the past, the AK is always considered a bad guy’s gun, and today it’s changing its presentation rapidly to also be a good guy’s gun.

Companies such as Kalashnikov USA, Arsenal, Century Arms, and others are adding the western favors into the new modern AKs.

Recently new images of new AK variants surfaced on the internet from Russia, and it has gotten a lot of attention.

As the AK evolves over time, there was a much-needed upgrade to its handguard design. The original wood components are great, but it lacks the ability to mount flashlights, lasers or other modular tactical attachments.

When the western countries approached the AK platform, they wanted to bridge the gap between an AR15 and an AK47, so railed handguards were introduced to the AK, giving more capabilities than before. 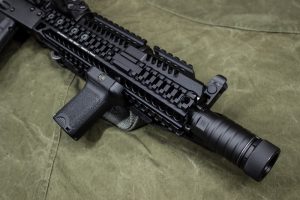 THE WESTERN INFLUENCE – MODERN AK UPGRADE
The AK and its variants are made all over the world. The gun is easy to produce, but it’s far from precision.

The AK has small parts and springs that required replacement every few thousand rounds. Some parts may tend to be loose and fall out when firing the weapon. The sheet metal stamped receiver are held together by rivets. Repairing can be quite a hassle since it requires special tools. 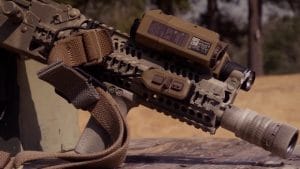 Some argue that the AK should remain the traditional configuration, but some wanted more out of it for tactical applications.

The strength of the American dollar allowed firearms import companies like Aresenal, Century Arm to bring rifles in from former communist nations and sell them for very reasonable price, and modify the heck out of them with some western taste. 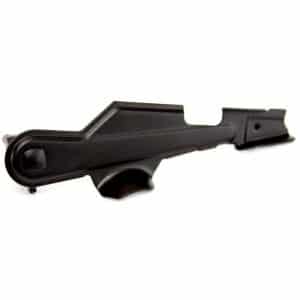 The rifle is great and the 7.62X39mm was more than enough for home defense. The American market is influenced a lot by the AR15 platform, so some Americans want their AK to be like an AR, but maintain the AK design.

The shooter controls the AK just as you would an AR, safety switch, pistol grip, loading and charging are something a 7 year old can do. 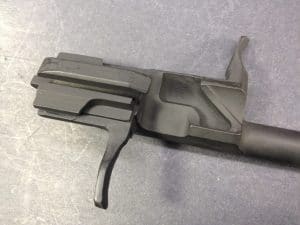 The AK is pretty much a piston driven system. Typically the shooter charge the AK while maintaining a constant grip with the right hand.

There are two ways to charge the gun: Over or Under. After a magazine is secured in the rifle, just come up under with your left hand.

The second method is with the support hand over the top. Just insert a magazine, then turn the rifle inboard so the ejection port faces up. Reach the top of the receiver and charge the bolt.

The dust cover for the AK rifle has gone through some changes. Instead of just using the dust cover for covering up the internal recoil springs, the modern railed dust cover has the real estate for mounting scope optics.

In the past, AK users can only mount a scope on the side of the receiver, where it can also interfere with the opening of the dust cover.

The railed dust cover allows optimal balance and also eliminate the need to mount an optic on the gas tube handguard. The design provides a rock-solid mount for accuracy and a forward-hinged, quick release cover to preserve AK’s field stripping qualities.

All the mindblowing upgrades to the AK47 is amazing, but is that it? Of course not. The AKs in Russia has gone through a major makeover in its design and branding. Everything from internals upgrades to pistol caliber AK submachine guns, the AK is getting just as powerful as the AR15. Here are some wicked new modern AK rifles Americans haven’t seen.

The AK-12 chambered in 5.45mm is designed to replace the AK74 in service with Russian forces. The AK-12 is designed from the ground up to have the integrated Picatinny rail for modern equipment mounting.

The gun is essentially designed to include more tactical abilities than a traditional AK.

The AK-107 is a “balanced” operating system designed to eliminate recoil impulse. The rifle is derived from the AL-7 with has the BARS (Balanced Automatics Recoil System). When the rifle is fired, gas is tapped from the gas port to enter the gas tube, driving the bolt carrier to the back and the counter the recoil forward.

The timing of the system is critical to make this system work.

The AK400 is another major upgrade chambered in 7.62mm. The rifle is exactly like the AK-12 with more rail space for accessories, but it has tons of adjustable features such as the gas tube, stock, dust cover. Even a better trigger and better recoil impulse.

If there is one thing that AK users wanted to do is to fill the gap between an AK and an AR. The Russian has done it with some accessories upgrades on the traditional AK to make it a killing machine.

Larry Vicker here had the chance to show you what you can do to clone something like this.

This is a weird rifle because it’s chambered in 9X39. The AK-9 is almost like an AK-105 style rifle and it’s designed for pistol caliber with suppression. Larry Vicker will show you how cool this gun is in the video.

The Dragunov MA is a short barrel AK style rifle designed by Yevgeny Fyodorovich Dragunov. It’s designed and led to the adoption of the AKS-74U.

The rifle is a gas-operated system and it has a lot of potential in the future as the new lines of Dragunov MA gun is in development.

If you think the HK MP5 rules the world, think again! The Vityaz-SN is chambered in 9mm, it’s designed to be an AK sub-machine gun for the Russian Special Forces. It functions just like a traditional AK.

The gun is lightweight, compact and effective, almost unknown in the U.S. for a very long time until now.

If want to fill the gap between the AK47 and the AR15, then the AREX AKB15 is for you. The AK rifle will remain the same, but with some major upgrade to its chassis like the ACR or the SCAR. It’s a badass upgrade to the AK, and you don’t want to miss out.

How Does Recoil Affect Accuracy On A Rifle Scope

Palmetto State Armory has the Ammo you want, in stock! Click Here!!