Shooting the New Trijicon SRO on a handgun is so much fun and better than others. Its large lens size really made a difference for tactical and competition shooters.

The dot just never leaves the frame, which is awesome.

If you ever had to take time to re-acquire the dot every time you squeeze off a shot using a small size red dot, that’s annoying.

Many handgun shooters had to come up with their own weird techniques to find and track the dot.

In this article, let’s talk about the new Trijicon SRO (Specialized Reflex Optic)’s new features, and how its enlarged window help tracks the dot better.

One of the barriers to entry on the Trijicon RMR is already the price. Many people may be asking how much does the SRO cost with these improved features.

The retail for the MSRP is only $40 more than the RMR, which is about $579.99. But don’t worry, there will always be better prices on the street once it’s officially released.

Some of the primary features of the Trijicon SRO are very familiar to the RMR; however, The SRO’s sight window is significantly larger, and the top enlarged portion of the lens allows the shooter to find and track the red dot faster and easier than the RMR.

With an RMR If I wasn’t practicing with it regularly when I have difficulty immediately finding the red dot in the sight window. I usually have to adjust the gun a little to find the dot eventually.

The SRO’s large viewing window has no problems finding the dot right off the draw, on a presentation without any extra training. Secondly, through harder recoil guns can make the dot disappear during fast follow-up shots as you manage the recoil.

With the larger window, the chances of losing we got are significantly less.  In fact, I did not have any problems keeping the red dot centered with the SRO.

The benefit of this sight dramatically improve the handgun shooting experience, but it’s also a great optic for anyone to install this on their rifle or as an offset backup sight.

Read More: Check out the guide here on how to zero a 45 degree offset sight correctly.

Another feature I have to mention is that the Trijicon SRO has the same RMR mounting platform. So if your handgun slide has a cut for an RMR, then you can mount the SRO without any problem. The same adapter plates and use for the RMR are gonna look perfectly with the SRO.

It has become very popular last few years as a growing trend, particularly among law enforcement and arm citizen where they are increasingly using a reflex optic on top of their personal defense pistols.

The sight is very useful and works great on top of shotguns, rifles and of course, pistols.  Particularly in pistols. It’s becoming really a growing trend and for good reasons to have a red dot sight on a pistol.

It makes the hardest part of pistol shooting easy, which is aiming with a short sight radius. I have found a great resource here for anyone starting new shooting pistols check it out here by Trex Arm.


Please check out the detailed specification from Trijicon’s website here

One thing to be aware of is the SRO optic could cause ejection malfunction. Because the front of the optic overhangs the ejection chamber will cause the pistol to malfunction.

How Much Does It Weigh

The optic weight 1.6 oz with battery installed. The weight feels the same as an RMR. It feels comfortable when you pick it up, and it will not be a weight burden.

Many people believe in strong front sight focus when shooting pistols when using the traditional method of iron sights. You really have to blur to Focal planes and focus strongly on that front sight in order making a good accurate hit.

I also wrote a post on how to shoot with a miniature red dot you can read them here.

Read More: If you ‘re not ready to spend $600 on an optic, we have created another buyer’s guide on affordable micro red dot under $400

Using your red dot change that game completely. You look at the target, which is the focal point, and then you just superimposed that red dot on top of it. Wherever you aim is where is bullet is going.

For regular Trijicon RMR it has its drawbacks, For some people, the window is too small, which makes it hard to find the dot on the draw or after recoil on as well.

Since you’re using an adjustable brightness red dot sight, you do have to be cognizant of the fact that you are using a powered optic, and you need to maintain the optic.  The RMR is a bottom mounting optics.

So when replacing the battery is a little bit annoying because you have to remove the entire sight, then change the battery,  and then put the everything back on.

The Trijicon SRO lasts about 3- years with 1 CR2032 battery. What’s new about it is that this optic is its top battery loading design without removing the sight like the RMR. 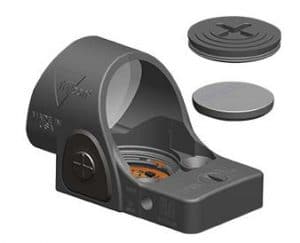 One of the biggest features is the top battery loading design like the Leupold Delta Point, so you never have to remove the sight again.

I often hated replacing the battery because I had to remove the sight first. This new design completely eliminated that problem.

Nobody wants to remove that optic then have 2 put it back on and reconfirm zero and it’s using the same CR 2032 batteries,  so it’s very commonly available. Another nice thing for the SRO lens is using less tent than the RMR so you have a much clearer picture.

Does The SRO Have Any Parallax?

The SRO is a parallax free optic. The shooter will benefit from the advantages of using the reflex sight, regardless of your body position if you can put that red dot in transpose it over your target. You should have a hit if it’s probably zeroed.

Parallax free also means if the dot is at the edge of the viewing window because of your body position or your head position, you’re still going to have a good hit.

There also new illumination options including 2-night vision modes. But there’s also a couple of new modes of operation, the first one is “Locked Out”.

It means is that the SRO’s going to use its auto-brightness mode, it will detect the ambient light and sets the dot an appropriate level.

You can lock that setting in so that you know it’s going to be a brightness level 6. Just like the RMR, the 2 brightness settings and these new modes of operation are going to be controlled by these Bay very easy to use buttons on the side of the unit.

Trijicon SRO VS. Others Comparison 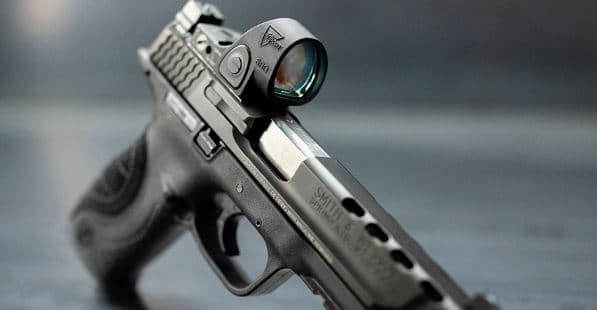 From a few days of testing, where we got to run a couple of hundred rounds for a couple of days of shooting and we use them on top of the blocks.

We tested it on the M&P, Glocks, and FN. Essentially it’s just like an RMR but with a bigger window. We really like that increased window in made it very easy to keep that red dot.

I was able to hit a 90-yard target twice in a row transition over the 110-yard target 2 times in a row. The sight held the zero and I gotta tell you this feels better than the RMR and DeltaPoint.

The other advantage of using these red dots is those pistol longshots very possible and you can place a very fine dot on the target.

This can also be very effective as an offset red dot sight.

If you’re just getting started with red dot sights on your defensive pistol, be sure to check out the Trijicon SRO. I hope you learned why red dot optics are getting popular in the handgun world, and the new features that the SRO has.

This new reflex sight a total package for delivering the same quality as the original Trijicon RMR and a larger window so you can shoot faster follow-up shots and be more accurate.

You never have to spend months practicing picking up the red dot align and center it perfectly in the viewing window because of the reflex sights from other brands are too small.

This thing is made for you to shoot faster by acquiring the red dot easier with a bigger window. It has the same mounting base plate as the RMR, its ready for any optic ready handgun slides.

How To Use A Strobe Light For Defensive Purposes