In this review guide, let's check out the Streamlight TLR 7 A Flex compact weapon light.

The TLR 7A Flex definitely feels much better in the hands with the upgraded control ergonomics.

Let's check it out if you don't already own the original TLR 7...

See How Much It Costs

What Is This Light Best Used For

The Streamlight TLR 7A Flex is the go-to compact pistol weapon light for compact size pistols with the front of the light bezel that sits flush with the muzzle. It's great for conceal carry, faster holstering, range use & low light personal defense.

Since the original TLR-7 suffered from an inferior switch design which made it difficult for most shooters to activate the light. The TLR 7A's upgrade toggle switch has made it very popular for Glock 19, Smith Wesson M&P compact, HK VP9, and many more.

Streamlight has upgraded the TLR 7 with the new HIGH and LOW switch options, which come standard with the TLR-7A Flex, making it one of the easiest pistol lights to activate while shooting one-handed and without breaking a two-handed grip.

Problems From The Original TLR 7

One of the biggest difference between the original TLR 7 and the NEW TLR 7A Flex is the upgraded control ergonomics.

Unlike the old TLR 7, it requires the shooter to break the grip off the gun to activate the light from the side. Overall it's not very intuitive.

The Fix Is Here!

And now... the NEW TLR 7A Flex has completely fixed this issue! the upgraded toggle switch gives the shooter better control with the firing hand and the support hand.

Based on testing, the high switch is our favorite as it sits higher for better finger reach & feels more tactile.

One thing Streamlight can make the switch better in a future product release would be to extend the paddle switch a bit out to increase the surface area for better contact.

The TLR7 is a very effective compact light with easy ambidextrous activation.

To activate strobe mode: Press one of the toggle switches 9 times, hold on the 10th press until the light flashes then off.

When the strobe mode is activated, you can still operate constant on and momentary modes as normal.

Fits flush from the sides

The TLR 7A Flex is the same size as the TLR 7 as far as the overall size profile. With the interchangeable control module, the TLR 7A Flex stretches slightly longer so the user can reach the control toggle switches much easier with index fingers.

The light only weighs about 2.4 oz with a battery installed, and it's so light that it's almost unnoticeable, which makes carrying it hassle-free.

Overall it looks great and feels great for mounting on any compact size pistols.

The NEW Streamlight TLR 7 Sub review on our site if this catches your eye. This light is a smaller version that fits sub compact handgun frames.

Or check out our TLR 7 Sub VS TLR 7A to see more side by side comparison.

The TLR 7A Flex can output up to 500 lumens & 5000 candela on a fully charged CR123A battery, and it's best used for illuminating targets of interest in low light up to 7-40 yards with maximum light beam brightness & hot spot.

The 500 lumens can lit up things nearby, but at a distance of up to 70 yards max the user wouldn't be able to clearly see besides the dimmed silhouette.

However, under ambient lights or fog, the most effective light can reach roughly about 16 - 20 yards

For personal defense use, it's absolutely important to see clearly what the target is, and if it's a person you need to see what he/she is holding in their hands to make the best judgement.

Lumen intensity is important, but Candela is king when it comes to identifying targets at longer distances.

The TLR 7A has a balanced focused hot spot & flood beam optimized for close-range applications up to 30 yards. It's effective to blind a threat with the hot spot, and use the flood beam to lit up the surrounding for max situational awareness without directly pointing the light at the subject.

The beam also has a warm tint for more neutral and accurate color rendition in low light, which is important for accurate target identification.

What you don't want is a bluish tint light that can skew the color perceptions in low light.

Battery orientation label is etched on the body 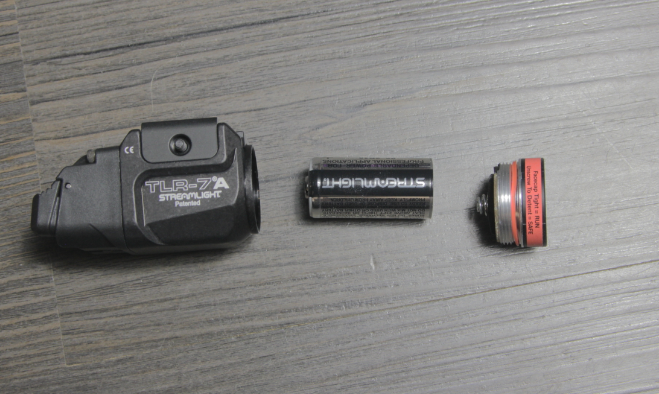 The light uses a single CR123A battery that lasts about 90 mins. Any CR123A batteries on the market will work.

To install the battery, the LED head has to be removed first, then insert the battery into the body.

What can be improved ? - As the weapon light technology advances for higher lumens & candela ratings, we are looking forward to seeing the Streamlight TLR 7 evolve into the use of a higher output rechargeable battery for higher lumen & candela output without increase in its overall size.

The TLR7A also features a safety mode on the LED lens bezel that allows the light to be completely shut off just like the original TLR7.

The purpose is to prevent accidental light discharge while carrying it in a holster to prevent battery loss, where the toggle switch can bump into clothing or other things without the user knowing.

The practical use of this feature is still under testing, but based on our initial impression, this feature can cause the user to forget to turn it back on and get surprised by it in an emergency situation. We highly recommend leaving the safety off at all times.

The screw mount can be tightened using the back of a shell casing, a coin or a flat-head screwdriver. It is recessed so it doesn't stick out on the side of the gun for a flushed profile.

In addition, we like the fact that Streamlight also included multiple keys for fitting the TLR7 on rail slots with different specs.

The TLR 7A is made out of 6061 T6 aerospace aluminum. Under normal use the light will last you a long time.

If you use the light for airsoft or simunition training, the lens will crack upon direct impact.

The lens bezel head has built-in threads that goes onto the body of the light. So in the event that the lens break, the light head can be replaced via Streamlight's Limited lifetime warranty.

IPX7 waterproof to 1m for about 30 minutes, meaning the light can withstand water splashes, but not recommended for water submersion.

The Streamlight TLR 7A Flex is the best compact size light for compact pistols among others. Overall it's a better version of the original TLR 7 with a better control switch, and it has a great appearance on most compact pistols with that streamlined contour external body.

Overall, the TLR 7A provides the shooter effective illumination in low light situations to clearly identify the target for personal defense. It works well for range drills, conceal carry on compact & full-size handguns.

For under $140, this is absolutely the best compact light to buy for compact size handguns.

Get It On Amazon

Can the TLR 7A switch work on the original TLR 7?

The upgraded control module switch DOESN'T WORK with the original TLR 7 as their circuit boards are different.