In this r Streamlight ProTac HL X review. Let's see what comes in the box and how the light performs

Let's check it out:

See How Much It CostsBuy It Here

The light comes in traditional Streamlight packaging with clear plastic box nothing fancy. 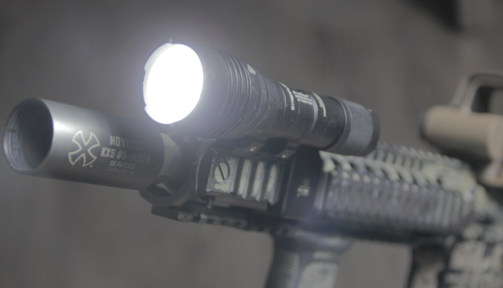 The ProTac HL X is Streamlight's competition entry to the long gun weapon light market with increased lumen and candela as the industry is pushing for more light output performance.

Pointing from 87 ft above down

The ProTact HL X has up to 1000 lumens intensity measured at the LED bulb, and the C4 LED provides plenty of brightness to see what you need to see indoor and outdoor, but that's not the most important spec.

The more important spec we care about is the 27,600 candela rating that has the ability to throw the light beam far for long-distance target ID in the dark.

So how many candela (cd) is a lot? Based on years of experience, cd ratings over 16,000 is great, and lights with candela ratings over 50k - 70k are undeniably amazing for long-range applications where the light hot spot stays tight, stays bright, and punches very far for threat control and for PID (Positive Identification)

As the tactical shooting community emphasizes more on candela performance over lumen, it's important to understand that lumen intensity is one part of the equation, but having more candela in the range between 20K to 90K is the current trend.

Yes, I Want ThisBuy It Here

The beam pattern of the ProTac HL X is a major spec that we paid attention to in order to decide if the light is good for CQB and long-range applications.

What's unique about it - The ProTac HL X has a similar beam pattern as the Surefire M600DF, which is more of a balanced beam between throw and flood for indoor and mid-range low light applications.

Generally speaking, a tactical light can't serve all functions at its peak without compromising in some aspects just like anything else.

Where does it fall short - The HL beam delivers a great close up performance, but the hot spot intensity fades off at a distance roughly past 120 yards, the target silhouette is visible but the details and the scene behind are very difficult to see in the dark if tree lines and other ambient lights in the environment get in the way.

The user has to tap the tail button 9 times & hold on the 10th tap to switch to cycle the mode to the preferred setting.

It works just like other Scout lights on the market, simply just screw or unscrew the desired tail end on and off the light.

What we love about the tail cap is that Streamlight has implemented a angled wiring tail end so that the wire tucks in closer to the handguard to prevent snag hazard.

What we wish Streamlight did was add dual switch feature so the light can be activated via tail switch or pressure switch on guns that don't have mirror gripping ergonomics. 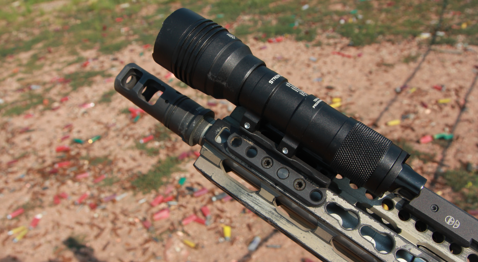 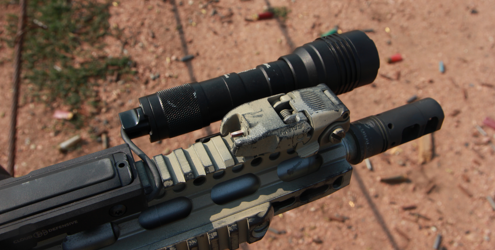 There are also aftermarket light switch accessories you can buy from Ariska and Unity Tactical to make whatever modular/slick light configurations you desire possible, which you can check in the next section.

The ProTac HL X does feature a unique strobe mode that isn't available on other high-end Scout type weapon lights. This feature is designed for signaling and disorientation for tactical applications.

When ever you get the light, you can program the control switch to cycle modes via the TEN TAP system.

On high lumen setting (1000 lumens), the battery lasts about 1.25 hrs as the intensity drops overtime.

On low lumen setting (60 lumens), the battery lasts about 22 hrs.

On strobe mode, the battery lasts about 2.5 hrs

On high lumen setting (1000 lumens), the battery lasts about 1.5 hrs as the intensity drops overtime.

On low lumen setting (60 lumens), the battery lasts about 23 hrs.

On strobe mode, the battery lasts about 3.25 hrs

Find Me A Good Deal

The Streamlight ProTac HL X rail mount comes with an fixed M1913 Picatinny screw rail mount, and it can also be removed to expose the Scout mount footprint.

Check out some of these scout weapon light mounts here

The Streamlight ProTac HL X is made to endure most of the rough handling such as drop, kick, sharp recoil impulse, muzzle brake shock, water submersion as long as it's not being intentionally destroyed.

The 6000 series aircraft aluminum material is impact-resistant and can handle most physical abuse and the tempered glass lens that is serviceable without replacing the entire light bezel.

The ProTac HL X comes on top after going through some tests that 90% of normal users wouldn't put the light through, please check out the video below and decide for yourself.

The Streamlight ProTac HL X weapon mounted light runs only about $140, and you can get better deals on Amazon or else where by checking out provided links below.

After all the light comes with pretty much everything you needed right off the bat without having to purchase any additional parts like the Surefire Scout, which can easily add up over $300.

Side By Side Beam Comparsion

In this section, we are going to put the Streamlight ProTac HL X against other competing lights on the market to give you an quick snap shot and let you can make a decision on which one to get.

Much Brighter Flood Close Up & Down Range

Yes, I Want This On My RifleBuy It Here

There are aftermarket pressure switches and weapon light mounts available for the Streamlight ProTac HL X for those who want to integrate it with a laser device or to improve the control ergonomics.

Here are a few products that we recommend you check out:

The throw capability of the light is much better than the Surefire M600DF, and it's overwhelmingly bright for close up personal defense applications at a fraction of the cost.

If you want something with more throw, please check out our Cloud Defensive REIN Review.